Here We Come a Wassailing or Non-Personent Ho Ho Hodie (too much?)

With our Wintry Wacky Walk, we wanted to create something magical, something that felt Christmassy, without directly referencing elves, Santa or the North Pole. And as always we wanted to help people to enjoy being outdoors – even in the coldest of weather. We also wanted to appeal to as diverse an audience as possible, so wanted to stick to the secular. It needed to be about traditions and about the changing seasons – in the same way that a Spring event of ours might be – what were the December, the midwinter, equivalents of the mad March Hare, the effervescent May Fly, or the May Queen? Jack Frost? – if you’re American, sure. The Winter Crone? – very tempting- maybe next year. Ebeneezer Scrooge? That man needs a show of his own.

In fact, as always, the setting became our inspiration – in this case, the magnificent re-modelled stable courtyard at the splendid Burton Constable Hall, near Hull. As well as being home to the beautiful hunters that would have been ridden out for a Boxing Day hunt, the stables are proud to play host to several protected species of bat and owl, and gaps have been left in roof spaces and windows left unglazed to allow them to move freely about. Once we discovered that, then the only decision left to make was which one of us got to dress up in the warm furry costume. Because quite frankly if you’re going to leave inviting little gaps in the eaves then it is your own fault if the squirrels get in.. in this case, a squirrel on a mission to deck the halls with boughs of holly! and Christmas swags,! and ribbons! and he can’t do it on his own.. 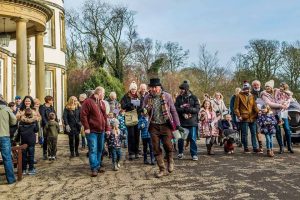